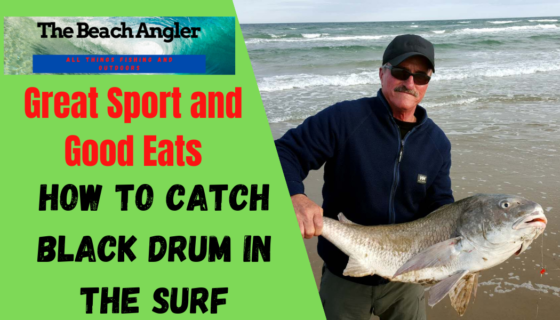 Table of Contents hide
1 How to Catch Black Drum?
1.1 Essential Surf Fishing Gear:
2 Best Bait for Black Drum
3 Black Drum in the Surf
4 Black Drum for the Table
5 So, what are you waiting for?

How to catch black drum? The black drum can be found throughout bays and estuaries, near channels and passes, in offshore waters as much as 100ft deep and along the beachfront.

Juvenile fish have 4 to 5 bold vertical black bars on a light background and can be mistaken for sheepshead, but are distinguished on closer inspection because sheepshead have teeth and black drum have chin barbels. These stripes usually fade to gray as the fish grow from 12 to 24 inches in length.

In the western Atlantic, black drum are found from Nova Scotia to Florida, the Gulf of Mexico, and the southern Caribbean coast; also from the Orinoco delta to Argentina. They are common between Delaware Bay and the coasts of Florida, and most abundant along the Texas coast.

Unlike spotted sea trout that spawns only in the bays, and red drum that spawns only in the Gulf, black drum will spawn in either bay or Gulf or in the connecting passes. They reach maturity by the end of their second year. Free spawning (random release of eggs) occurs mostly in February, March, and April with some later spawning occurring in June and July.

How to Catch Black Drum?

Tackle for drum fishing depends on the size of the fish present. For small drum, light tackle is more sporting but for 40-pounders, heavy rods with plenty of backbone are needed.

Strong single circle hooks with line and good strong leader will be your best bet for fighting these strong fish in and around the oyster reefs and other structure you find them holding on.

For more sport, try light tackle using a single drop with no sinker, allowing the bait to move along the bottom with the current. If the bait will not sink, a few split shot on the leader will help. The absence of weight increases the fight of the fish.

A conventional bottom rig with sinker and one or more drops with single circle hooks is most common for bank and surf fishing or for fishing from an anchored boat.

Black drum will mouth a natural bait first before swallowing it, so anglers need to wait a few seconds before setting the hook. Once a big adult drum grabs the bait, it takes off with gusto, and can pull like a freight train. Landing these big fish on light tackle can be challenging.

A 40-lb braided line with a comparable weight fluorocarbon leader is a good compromise between castability and strength. However, big drum are frequently caught with everything from 8-lb monofilament to 100-lb braided lines with heavy steel leaders.

An effective strategy for fishing from a boat is to select a spot with a sandy bottom or oyster bed where food is plentiful at a time of day with some tidal movement.

Pier or bank fishing should target jetties, structure, or a boat channel near a rapid increase in depth and some tidal movement. With stout tackle, black drum above 10 lb are relatively easy and fun for children to catch.

Because bigger drum can make a long, strong run right after taking the bait, preventing broken line often requires a relatively light drag setting early in the fight. Drum neither jump often nor make long racing runs or any of the other things a great sport fish is supposed to do, however they are powerful and will fight like being hooked up to a tug boat.

The best time to catch large drum are the annual runs of “bull” drum. In many of our deeper bays, around some jetties in the Gulf, and in some channels, large drum gather in schools before spawning. In February and March, catches of these large fish are common and make for great memories, stories and photo opportunities. Many anglers are passionate about fishing this annual drum run in Texas. It is probably the best chance many people have to land a 30 to 40 pound fish.

Rarely taken on artificial baits, black drum feed primarily by feel and smell. Cut fish, squid and shrimp are most often used, with peeled shrimp tails being the most popular. Bottom feeders by nature, black drum are most commonly caught with bait either on the bottom or suspended within a couple feet of the bottom. While shrimp is the most popular bait; squid, clams, sand fleas, crabs and strip baits such as Fishbites all catch drum as well.

The older, larger fish, seem to be especially fond of blue crabs and are readily caught on a half or a quarter of a blue crab with the top shell removed and cut or broken to fit on a 4/0 to 9/0 hook. For catching the smaller black drum for the table, peeled dead shrimp or fishbites will be your best baits.

Black Drum in the Surf

When surf fishing for black drum, looking for deeper guts and breaks (washouts) in the sandbars. If you can find areas with coquina clams as well, you have a likely spot to find drum.

Water clarity is not an issue when fishing for drum like some other species. Drum feed primarily by feel and smell rather than sight. Even on rough choppy days with murky water, you can still catch black drum from the surf.

You can find drum of all sizes in the surf, so it’s best to rig up for anything. Your standard heavy surf rods and reels will handle any drum you may encounter.

You need to try some rods with shrimp and or fishbites and others with cut blue crabs or cut mullet for the big bruisers that may be cruising the beachfront. Check this article for the best baits for surf fishing.

If you find a few smaller fish to take home for dinner, you will find them to be excellent table fare. Fried, grilled, or broiled, black drum are a great eating fish. As always, keep what you can use and release the rest. If you don’t leave any, soon, there won’t be any.

Black Drum for the Table

Black drum are edible, with a moderate flavor, many coastal restaurants noted for their seafood serve drum extensively. Fish taken in cold weather before spawning tend to be fatter and in better condition than those caught in summer after spawning. Big drum can be challenging to clean; removing the large scales is a challenge.

Many fishermen prefer to fillet with an electric knife, first removing the fillet from along the backbone, and then using the electric knife to cut the fillet from the skin and scales. Drum weighing more than five pounds usually have coarse flesh; the larger the fish, the coarser the flesh. Rather than eating these larger drum, anglers are encouraged to release them to spawn and fight another day.

So, what are you waiting for?

If you’re looking for some great fun and good sport, and some fishing that the whole family can enjoy, then fishing for black drum might just be you’re game. Find you a good section of beach, take the family, grill some burgers and do a little drum fishing. You’ll have a great time, make some wonderful memories, and just might bring home a mess of tasty fillets for dinner.

Go get ya some! Please remember, try to leave it better than you found it. If you carried it in, carry it out. If you have any questions, drop me a line or comment, and I’ll get back to you and help any way I can. Be safe and good fishing. If you have any comments, questions, ideas or suggestions, please leave them in the comment section below and I will get right back to you. You can follow us on Facebook: Rex The Beach Angler, Instagram: thebeachangler7, Twitter: @AnglerBeach, and YouTube: Man Art Creations.