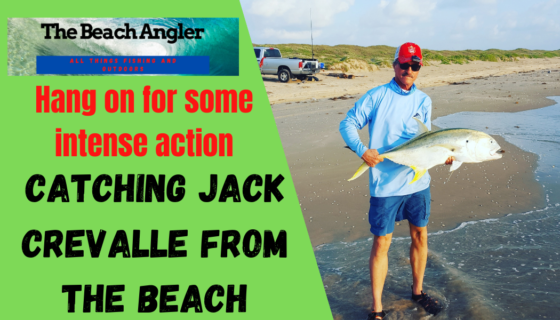 Spring has sprung, the water along the beach front is warming, and catching Jack Crevalle in the surf gets in high gear. As the water continues to warm, the schools of bait will start to migrate along the beaches. Following close behind will be predators of various kinds. One of the most aggressive and most fun to catch is the Jack Crevalle.

Big Jack Crevalle will attack schools of bait fish like a pack of wolves and will crush your live bait and artificial lure offerings. You better hang on because you will be in for a fight with multiple long drag stripping runs. Better arm workout than hangin at the gym, and a lot more fun.

What is a Jack Crevalle

The crevalle jack (Caranx hippos), also known as the common jack, black-tailed crevally, couvalli jack, black cavalli, jack crevale or yellow cavalli, is a common species of large marine fish classified within the jack family, Carangidae. The crevalle jack is distributed across the tropical and temperate waters of the Atlantic Ocean, ranging from Nova Scotia, Canada to Uruguay in the west Atlantic and Portugal to Angola in the east Atlantic, including the Mediterranean Sea. The crevalle jack inhabits both inshore and offshore waters to depths of around 350 m, predominantly over reefs, bays, lagoons and occasionally estuaries.

Young fish dispersed north by currents in the eastern Atlantic are known to migrate back to more tropical waters before the onset of winter. Their color ranges from brassy green to blue or bluish-black dorsally, becoming silvery white or golden on the belly. A dark spot is present on the pectoral fin. The crevalle jack is a powerful, predatory fish, with extensive studies showing the species consumes a variety of small fish, with invertebrates such as prawns, shrimps, crabs, and mollusks.

The crevalle jack is a powerful predatory fish which predominantly takes other small fishes as prey at all stages of its life, with various invertebrates generally being of secondary importance to its diet. Several studies conducted on the species’ diet over its range have found other aspects of its diet vary widely, including the specific types of prey the species takes and the change in diet with age.

The most detailed of these studies was conducted in the Southern USA, which showed the species diet comprised between 74% and 94% fish. Both adults and juveniles feed throughout the day, generally becoming inactive at night. The crevalle jack is also an important prey species itself, taken by larger fish, such as billfish and sharks, as well as seabirds.

Matching the hatch when it comes to bait is always a good idea, but live or cut mullet is a good choice when fishing for Jacks. Soft plastics, silver spoons, most anything that resembles a bait fish will work when the Jack Crevalle are in a feeding frenzy. If you like to fish with top waters, and the surf conditions allow it, you can have the time of your life as big jacks will crush top waters.

Catching Jack Crevalle in the Surf – How to?

Jack Crevalle are present in the surf zone in spring through summer and into fall. When the water begins to warm, schools of anchovies, and mullet will show up along the beach front. You can bet the Jacks will be right behind them. Jack Crevalle will sometimes be seen nearly beaching themselves chasing bait along the beach.

Cruise along the beach and watch for diving pelicans and or sea gulls. There will be bait and fish there. Toss a live mullet into the fray and hang on. Try a large top water lure and get ready for some explosive action. If no birds are present, find a good deep gut or rip that has bait present and set out your bottom rigs with live or cut mullet and just sit back and wait.

A word of advice, keep your drag set loose, big jacks can yank your whole rig out into the surf. Been there done that. If they don’t take the whole rig, they wreak havoc on your equipment. Broken lines, straightened hooks, broken swivels and I’ve even had my worm gear bent on my bait casting reel before. These fish are serious, a blast to catch, but you will know you tangled with something when your done.

Can you eat Jack Crevalle?

The crevalle jack is an important species to commercial fisheries throughout its range, with annual catches ranging between 1000 and 30 000 tons over its entire range. It is taken by a variety of netting methods, including purse nets, seines and gill nets, as well as hook-and-line methods. The crevalle jack is also a revered game fish, taken both by lures and bait. The species is considered of good to poor quality table fare, and is sold fresh, frozen, or preserved, or as fishmeal or oil at market.

Crevalle jack are generally considered quite poor table fare, with selection of younger fish and bleeding upon capture giving the best results. The flesh is very red and dark due to the red muscle of the fish, which makes it somewhat coarse and poor tasting. So the short answer is, yes you can eat Jack Crevalle, but it’s going to have a very “fishy” taste. People in different parts of the world do eat them, and it won’t kill you.

They are used as bait for shark fishing. Their bloody meat is an asset when it comes to drawing in big sharks. A large chunk of Jack paddled out off the beach front could land you a monster shark. But that’s another story 😉

Get Ready for a wild ride.

Now that spring is here and water temperatures are rising. Look for the bait schools to show up and along with them the hungry predators will be lurking. Early mornings and late afternoons are great times to be looking for diving birds on schools of bait. Gear up and go get ya some! Travel safe, good fishing, and as always, leave it cleaner than you found it. You can follow us on Facebook: Rex The Beach Angler, Instagram: thebeachangler7, Twitter: @AnglerBeach, and YouTube: Man Art Creations.