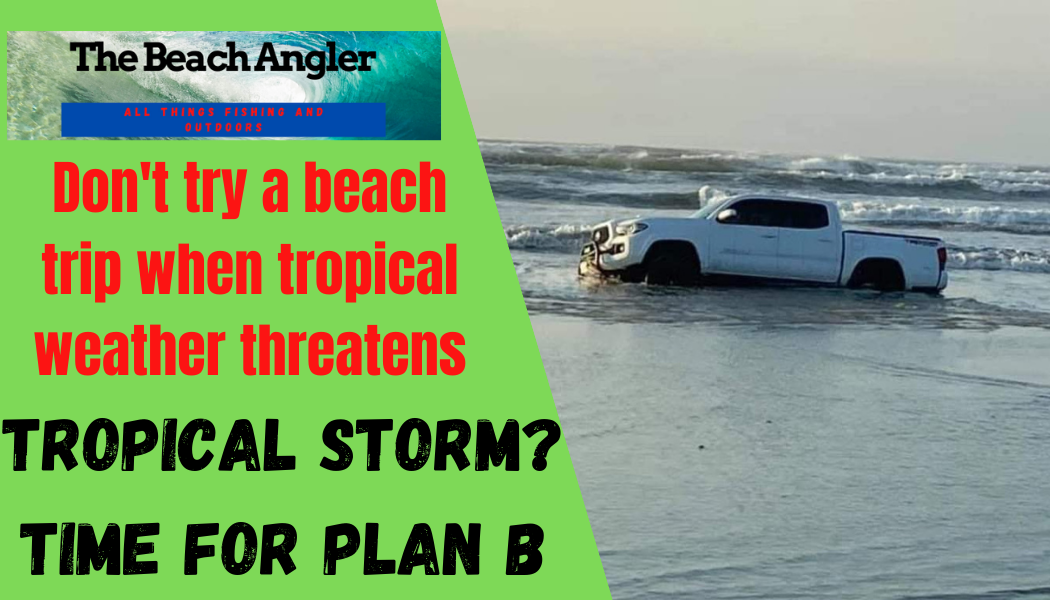 It’s officially hurricane season again. Just as the fishing along the beach is heating up, so are the tropics. This past week we saw just how quickly mother nature can alter one’s fishing plans. Tropical Storm Cristobal spun itself right through the middle of the Gulf of Mexico pushing high tides, wind and waves affecting all the Gulf States. We had a beach trip planned, but having seen firsthand what storms can do, we decided to try again another day. Unfortunately for some, they didn’t heed the warnings, and paid the price.

Table of Contents hide
1 Tropical Weather in the Gulf of Mexico
2 Tidal Surge and Storm Tides
2.1 Storm Surge vs. Storm Tide
2.2 Factors Impacting Surge
3 Tropical Storms and Beach Camping
4 Ignoring the Warnings – Recipe for Disaster
4.1 My sincere advice is, please don’t do it. Wait for another day. Try a Plan B
5 Always Have a Plan B

Tropical Weather in the Gulf of Mexico

The official hurricane season for the Atlantic Basin (the Atlantic Ocean, the Caribbean Sea, and the Gulf of Mexico) is from 1 June to 30 November. As one can see in the graph below, the peak of the season is from mid-August to late October. However, tropical weather and tropical storms can occur anytime in the hurricane season, and this past week, we had our first Tropical Storm in the Gulf of Mexico.

Tropical Storms affect the coastline for hundreds of miles away from their center and can produce high tides, large waves, rip currents and other dangerous conditions. Frequently when a Storm enters the Gulf of Mexico, one will see abnormally high tides that make fishing and camping on the gulf beaches extremely difficult at best, and down right dangerous at times.

The beaches along the entire Gulf of Mexico can be affected with the Tidal Surge and Storm tides associated with the Tropical storm system.

Along the coast, storm surge is often the greatest threat from a hurricane or tropical storm. Hurricane Katrina (2005) is a prime example of the damage and devastation that can be caused by surge. At least 1500 persons lost their lives during Katrina and many of those deaths occurred directly, or indirectly, as a result of storm surge.

A storm surge is an abnormal rise of water generated by a tropical storm, over and above normal daily tidal movements. A storm surge should not be confused with storm tide, which is defined as the water level rise due to the combination of storm surge and the normal daily tide fluctuations. This rise in water level can cause extreme flooding in coastal areas particularly when storm surge coincides with normal high tide, resulting in storm tides reaching up to 20 feet or more in some cases.

A storm surge is produced by water being pushed toward the shore by the force of the winds moving around the storm.
A storm surge is a very complex phenomenon because it is sensitive to the slightest changes in storm intensity, forward speed, size, angle of approach to the coast, central pressure, and the shape and characteristics of coastal features such as bays and estuaries.

Camping at the beach is limited to the area between the high tide level and the dune line. Normally that is not a problem, one simply set your camp close to the dunes and far above the high tide line. When a Tropical storm system enters the Gulf however, all bets are off.

As one who’s “been there done that” on more than one occasion unfortunately, It’s not something one want to experience if one can avoid it. There will be other days. The risks to one and your equipment and vehicles is far to great. If the forecast is calling for a tropical system to be forming, reschedule and go for a plan B.

The Tidal surge and storm tides along with the increase in wave heights will push water all the way to the dunes and one will find your camp in the water.

Ignoring the Warnings – Recipe for Disaster

There are some that seem to ignore all the tropical storm warnings and just go anyway, and they end up regretting it in the end. I can tell one from firsthand experience, waking up to the jostling of the waves washing up against your tent cot is not a good thing. Breaking camp with the waves and water washing through camp and one gear in the dark is no fun at all.

Then to have to try to drive off the beach with water to the dunes will further ruin one day. Not to mention the long term damage to your vehicle. Saltwater is very corrosive and it gets into places one just can’t seem to wash off no matter how thorough one are.

For years to come, or as long as one won that vehicle, one will be faced with hundreds, if not thousands, of dollars in repairs. Everything from brake calipers, brake lines, rotors, differential covers, shocks, wheel bearings and u joints just to name a few.Your camping gear will suffer much the same fate. Rust, mold, mildew will make themselves known and shorten the lifetime of your equipment.

Worse case, the high water often turns the beach similar to quicksand. The waves wash up around your tires and wash the sand out from under them and with each succeeding wave, your vehicle sinks further until sometimes the vehicle becomes buried.

Remember, no one can come help one in these conditions. You will be on your own until the surge recedes. Several hours at least and by then serious damage has already been done. If one do require help, it can be very expensive when one are down the beach miles from town.

My sincere advice is, please don’t do it. Wait for another day. Try a Plan B

Always Have a Plan B

Whenever one are planning a trip to the beach, always watch the weather forecasts, particularly the tropical storm forecasts. If there is a chance of anything tropical (wave, storm, hurricane) make other plans. Websites like wunderground.com, or accuweather.com have good tropical forecasts. You can find detailed forecast information at NOAA.gov website as well.

If the tropical storm is not actually headed in your direction, and one are just potentially dealing with the tidal surge and high seas, look into fishing the bays instead. The higher than normal tides will have the water pushed up into the marshes and the fish will be looking to take advantage of the deeper water.

You can have some great fishing and still salvage your planned trip. You can read about our Plan B trip here. If the tropical storm is headed toward your planned destination, it should be obvious, CALL IT OFF!! Please stay safe. Going to the beach should be fun, not a nightmare. Try again another day. Whenever one do go, please try to leave it cleaner than one found it.

I hope this helps. You can see from the photos, it is not something one really want to experience. If one have any questions, comments, or even complaints 😉 leave them below in the comment section and I’ll get back to one ASAP. You can follow on Facebook: Rex The Beach Angler Instagram: thebeachangler7 Twitter: @AnglerBeach