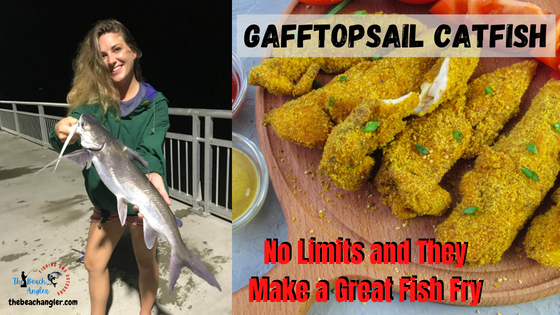 Gafftop Catfish are not usually at the top of anyone’s list when it comes to fish to pursue. Most view them as trash fish, slimy and with some sharp fins, but once you get past that they are actually very good to eat.

With more and more people fishing for the “glamour” species, combined with natural events like freezes, floods and droughts, the pressure on traditional game fish numbers can take a serious toll. As a result, we have seen size limits increased and bag limits reduced for most major game fish species.

All of this makes it difficult if you’re looking to put some fillets in the freeze, or have friends and family over for a fish fry. It can take multiple, successful trips to collect enough fish if you target only the popular game species.

But, what about the less glamorous species, those that some may even call “trash” fish? They are plentiful, have no bag limits so you can fill your freezer much easier and quicker, and many of them are actually good eating.

Previously we looked at catching and eating ladyfish or skipjack, the Gafftopsail Catfish is another one of those fish that might just surprise you if you’ll give it a try.

Gafftopsail catfish, aka Snot Cats, Snot Sharks or Slime Cats, are easy to catch and have no bag limits. They are slimy, hence the nicknames, with sharp spines on their dorsal and pectoral fins that can cause a painful injury. But, if you can get past the slime and spines, they make very good table fare. As good or better than their freshwater cousins.

The gafftopsail catfish ( Bagre marinus) is one of the two most common species of saltwater catfish, the other being the hardhead catfish (Ariopsis felis), found in the waters of the western Atlantic Ocean, the Gulf of Mexico, and the Caribbean Sea from as far south as Panama and as far north as Cape Cod.

Gafftopsail catfish get their name from the long dorsal fin that looks like a sail coming out of their back. They are covered with a thick slime that has caused fisherman to come up with several less than flattering nicknames for them, such as: Snot Cats, Snot Sharks, and Slime Cats among others.

Like the hardhead catfish, gafftop catfish have long sharp spines on their dorsal and pectoral fins. And, these spines are coated with a toxic/venomous slime that can be very painful if you have the misfortune of getting punctured by one of the spines.

Venom glands are found along the sharp, bony spines at the edges of their dorsal and pectoral fins, these spines can be locked into place when the catfish is threatened. If you get jabbed by one of these spines, a membrane surrounding the venom gland cells is torn and venom is released into your wound.

Most of the time these catfish “stings” or punctures will produce stinging and swelling for up to six hours. Deeper wounds will result in more venom and more pain. Treatment usually involves immersing the wound in hot water, antibiotic cream and aspirin or other pain reliever.

As with any marine injury, if the pain and swelling persists seek medical attention. A secondary bacterial infection can occur and can be dangerous especially to those whose immune systems may be compromised.

Gafftopsail Catfish are much larger than Hardhead Catfish with big gafftops reaching 24-plus inches and weigh 10-pounds or more with the Texas record being 34 inches and 13.33 pounds. A large hardhead, on the other hand, will be more in the 3 to 4 pound range.

Gafftop catfish spawn in the spring producing large, up to 1 inch diameter, eggs that are carried in the mouth of the males until they hatch and the young fry can fend for themselves.

How to Catch Gafftopsail Catfish

Now granted, most folks are not specifically targeting Gafftop catfish. They are an incidental, and often cussed, by catch while chasing the more popular speckled trout, redfish, black drum and flounder.

And, unlike most other saltwater catfish, gafftopsail catfish are not bottom feeders but instead feed throughout the water column. Their diet consists mostly of crustaceans, like crabs and shrimp, but they will also eat worms, other invertebrates, and bait fish. A diet very similar to trout and redfish.

Gafftop catfish will school and push shrimp and bait to the surface attracting gulls. There have been many times I’ve pulled up on a flock of gulls working over a school of fish thinking I’m about to get into some speckled trout action, only to find gafftops waiting on my bait.

And yes, artificials like soft plastics and spoons also catch gafftop catfish. They do run in schools so where you catch one, there are usually more in the area.

Though they feed throughout the water column, baits fished near the bottom seem to work best. Gafftops can be found in the bays and along the beachfront. They require no special tackle, they are very abundant, easy to catch and make for a good fish fry.

When handling gafftop catfish you must always be aware of the spines on the dorsal and pectoral fins. A good pair of pliers, fish grips or boga grips can help. Or, simply make sure to grip the fish around the fins with the fins protruding between your fingers.

Once you have them unhooked, it is best to bleed them out by cutting off their tail just in front of the tail fins. The fish will bleed out quickly and you will have less of that fishy red meat to deal with when filleting. After they are bled out, place your gafftops in a cooler with ice until ready to clean.

Once back at the fillet table, you can use a high pressure nozzle on your water hose to rinse off the slime. Or, even stop at the local car wash and use their high pressure rinse. 😉 If none of that is an option, a towel or good filet glove will help you handle the fish.

The first step when cleaning gafftopsail catfish is to consider those spines.

You can use a pair of pliers, nippers or your filet knife and cut them off or be very careful and work around them. Keep in mind, one slip and they can still jab you.

Once you have the spines removed, you can fillet just like any other fish. Remove the fillet from the backbone, flip it over and remove the skin from the fillet. You may notice some red meat on the fillet just under the skin. Take a sharp thin bladed knife and shave this off. It is where the “fishy” taste comes from.

There is also a strip of dark meat down the center of the fillet. I split the fillet along this line and remove that thin line of red meat as well. Now, don’t forget the belly meat. Much like freshwater Flathead catfish, gafftops have a thick boneless chunk of meat along their belly.

Can You Eat Gafftopsail Catfish?

The answer is yes, very much so. Once cooked, you have firm white meat that is not in the least bit fishy tasting. And, can be prepared any way you would a freshwater catfish.

They are excellent fried but they can be grilled, broiled, blackened or pan seared as well. Dredge in your favorite fish fry batter and fry as you would any other fish. You’ll be pleasantly surprised, it may become one of your favorites.

Grilled, gafftop catfish make excellent fish tacos. Just add some Pico de Gallo, cilantro and a squeeze of lime. Get creative, it’s a very versatile fish and by eating them you take some pressure off the more popular game fish species.

And, since there is no limit, you can get a mess of tasty fillets for the freezer or the fryer much faster. You’re likely to catch a few when your out chasing trout or reds anyway. Why not keep them? They ate your expensive bait so get some return for your money.

Your fishing buddies may make fun of you at the fillet table, but if you invite them over for the fish fry, they won’t be laughing anymore. Once they’ve tried it, they will likely be “catfisherman” too.

Don’t be afraid to try something different. Gafftop catfish are excellent fried. In fact, they are much better than freshwater catfish in my opinion. There are plenty of them, they are easy to catch and, in many places there are no bag limits.

Try some at your next fish fry. You’ll be surprised at just how good gafftops are. Yes they are slimy and you need to watch the dorsal and pectoral fins, but with proper care you will find them no more difficult than freshwater catfish.