Of the many fish prowling the beach front, the Speckled Trout is one of the most sought after and prized by surf anglers. These hard fighting fish can be found roaming the surf from spring through fall along the coast of the Gulf of Mexico and the Atlantic coast of the southeastern US. Specks will readily take both natural baits and lures making them a great sport fish with the added bonus of being great table fare as well. 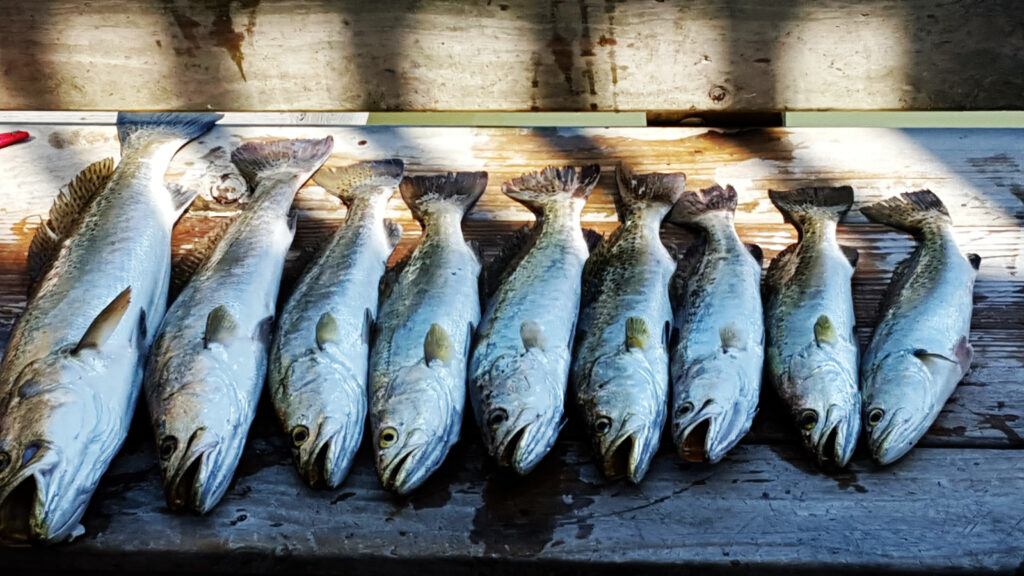 The spotted sea trout, also known as speckled trout, speck, speckles, spotted weakfish, spotted seateague, southern seateague, winter trout, sea trout, Nosferatu fish, and black trout, is a commonly found in the southern US along the coast of the Gulf of Mexico as well as and the Atlantic Coast from Maryland to Florida and are most numerous along the coasts of the southeastern states, such as Texas, Louisiana, Alabama, Mississippi, Georgia, and Florida.

Most Speckled Trout are caught in the shallow grassy flats of bays and estuaries, shallow, they can be found in virtually any inshore waters, from the surf of barrier islands to well up coastal rivers, where they often come seeking shelter during cold weather.

Small trout primarily on shrimp, but as they grow larger their diet shifts more to fish. Large trout prefer to feed on mullet, as large as they can swallow. Sometimes the mullet will be half to two-thirds the size of the trout trying to eat it. Large trout will also feed on juvenile trout and other fin fish.

Where to Surf Fish for Speckled Trout?

Speckled Trout can be found all along the beach in search of food. Find some bait activity, and you will likely find trout lurking nearby. Watch for birds diving, or even concentrations of birds resting on the beach. Diving gulls and pelicans are a good sign that bait is present and you can bet predators, including speckled trout, are somewhere in the area. Cast your bait under the birds and also along the outer edges of the feeding action. Sometimes the bigger fish like to hang out on the edge while the smaller “schoolies” will be right in the middle of the frenzy.

Specks are ambush predators and prefer the dead end guts where they can trap bait against the shallows, or the rip currents (suck outs) where the water that has been driven up on the beach front by the wave action returns to open water across the sand bars. This rip current action cuts a channel in the sandbar and the out going current pulls bait out across the sand bar into the deeper water where the Trout wait for an easy meal.

Casting your bait on the back side of the sandbar just outside the rip current will put you in the sweet spot. You can also cast into the rip and let the current swing your bait across the bar and out to the edge of the current. Look for deep guts along the beach front that dead end or wash out. Cast your bait up on the shallows and work it off the edge of the dead end into the deeper water. The Trout will be waiting to pounce.

Passes and Jetties along the beach are great places to catch Speckled Trout. They will be following the bait as it gets pulled along by the currents or hiding in the rocks. Beach front piers can be productive for Specks as well, particularly at night under the lights when bait congregates being drawn by the lights.

When is the best Surf Fishing for Speckled Trout?

Spring and Summer are prime times for Surf Fishing for Specks. When the clear green tides reach the beach front, the Trout will soon follow. The timing of this will vary by location of course. The mullet migration along the coast is a great time to target large Speckled Trout. There will be a variety of predators chasing these large schools of mullet and Speckled Trout will be one of them.

During the dog days of summer when the temperatures climb, early morning and late evening are your best bets for catching specks. Combine that with some good tidal movement and you’ve got a potential winner. Doesn’t seem to matter if the tide is coming in or going out, just as long as its moving. The tidal flow will move the bait giving the trout more opportunities to ambush.

How to Surf Fish for Speckled Trout.

Fishing for Speckled Trout in the Surf can be done with your typical bass fishing rods and reels. The saltwater environment can be rough on gear that’s not designed with corrosion resistant materials however. You can invest in “Trout Tackle” and it will be of course designed with saltwater in mind. “Trout” rods will be typically slightly longer than standard bass fishing rods. Randy Meyers has a good introductory Surf Fishing Course that has some great tips for catching Speckled Trout in the Surf.

Speckled Trout readily take artificials, and the “purists” will turn up their noses at bait soakers. However, live bait is still the champ when it comes to catching large Speckled Trout from the Surf. Large specks feed mainly on fin fish. Mullet, shad, menhaden, mud minnows, pin perch, small speckled trout, and the current favorite seems to be croaker.

“Croaker Soakers” as they are called have been having great success on large Speckled Trout. A fresh live croaker cast out into the surf near a rip current or dead end gut is hard to beat. If the Specks are there, they will eat it. Fresh live mullet would be the next choice, and you can catch your own in the surf if you can throw a cast net. Live shrimp will always catch fish, but you will have to cull through the smaller ones that tend to feed mostly on shrimp.

If live bait is unavailable, fresh cut bait will work, just not as well. Lures work well on trout and are much easier to store and transport than natural bait. Soft plastic shad and shrimp imitations are a good choice. Hard plastic swim and jerk baits that resemble mullet or menhaden will catch quality fish. The old “standby” gold and silver spoons seem to always catch fish and should be in everyone’s tackle box. 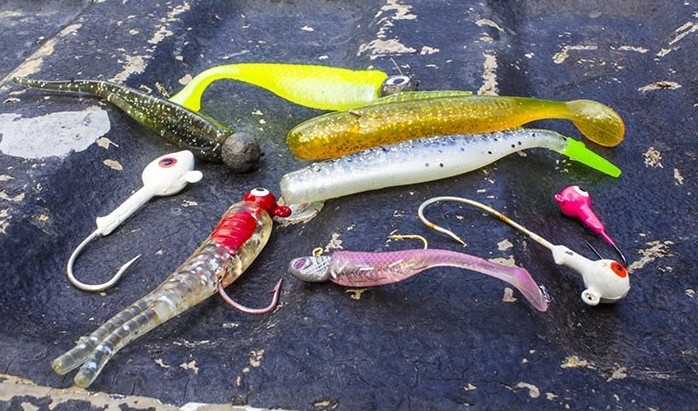 Rig Up and Get You Some.

If you have a chance to fish the beach, don’t overlook the Speckled Trout. Great fun, hard fighters and great on the plate. 😉 Lots of ways to catch em. It’s always a good idea to check with the local bait and tackle shops as well as local message boards where you intend to fish. You’ll get the latest information on where they are and what they’re eating, and probably make a few new friends in the process.

If you are going to wade fish the surf zone, especially near rip currents, don’t forget to wear a PFD (life Jacket). There is not fish worth drowning over and rip currents can sweep you off your feet and out to sea before you know it. Please, try to leave the beach cleaner than you found it. if your carried it in, carry it out. Be courteous, be kind, travel safe and enjoy the journey.