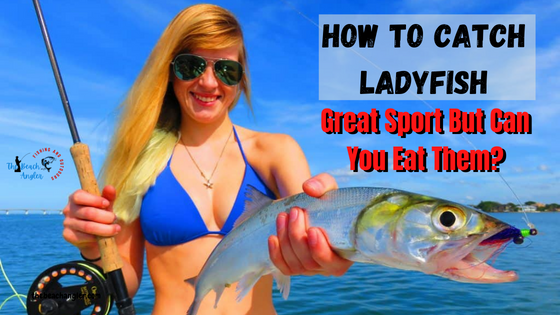 How to catch Ladyfish, the poor man’s tarpon, not normally the target species but they are a blast on light to medium tackle. They readily take natural and artificial baits, put up a great fight often jumping out of the water ( hence the name poor man’s tarpon) in an attempt to throw the hook.

Table of Contents hide
1 But, are ladyfish good to eat?
2 Quick Look:
3 Are Ladyfish the Same as Skipjack?
4 How to Catch Ladyfish
4.1 Ladyfish Make Great Cut Bait
5 How to Clean Ladyfish
6 How to Cook Ladyfish
6.1 This is how to make ladyfish fish cakes:
6.2 Here is the step-by-step preparation, for canning and cooking ladyfish:
7 Try Something New Cook up Some Ladyfish

Some may think of the ladyfish as a trash fish but, if you are like me, you just like catching fish. Ladyfish are very cooperative, run in large schools and in most places there are no limits. They fight hard putting on an aerial show, and in my opinion, beat the heck out of catching nothing.

But, are ladyfish good to eat?

We’ll let’s take a closer look at ladyfish. How to catch them and what you can do with them when you do catch them. I think you’ll be pleasantly surprised if you will just give them a chance.

Ladyfish, or skipjack, are great sport on medium to light tackle or fly rod. They are aggressive, fight hard and often jump out of the water in their attempts to throw the hook. They feed primarily on shrimp and small bait fish and will readily take small artificials like spoons, soft plastics, jigs and streamers. They are not considered to be good table fare but they are edible and with proper care and cleaning you will find them to be quite good. Ladyfish do make great cut bait however for numerous species from redfish, snook, snapper, grouper and sharks.

Are Ladyfish the Same as Skipjack?

It’s a frequent sight along the Texas coast. You’re driving down the beach an up ahead you see birds diving over a school of bait. Fish are breaking the surface and a full fledged feeding frenzy is on! You ease up to the action, get out and cast into the frenzy and immediately you’re hooked up.

What is it Speckled trout, redfish, bluefish? You never know for sure in the surf. Then it goes airborne and you see this long silver fish doing its best tarpon imitation and you realize you’ve come up on a school of ladyfish or skipjack. A blast to catch, but not what you were hoping for.

Ladyfish, a saltwater and brackish water species, range from the North Atlantic Ocean, Gulf of Mexico, Caribbean Sea, to the Atlantic coast off Brazil, and Fiji in the South Pacific.

They are members of the Elopidae family of ray-finned fish containing a single living genus Elops.

Ladyfish are related to tarpon and bonefish but their mouths are shaped much differently than both other species, and they lack the long dorsal fin ray that the tarpon has plus they don’t get near as large as the tarpon either.

Ladyfish can grow up to 3 feet (1 m) in length and weigh up to 15 pounds ( 6.8 kg) . Ladyfish feed primarily on small bait fishes like anchovies, mullet and menhaden as well as small crustaceans. They are aggressive feeders making them relatively easy to catch.

How to Catch Ladyfish

Ladyfish are not hard to catch and will take a variety of artificial lures as well as natural baits. They have become a favorite of saltwater fly fisherman as well. Ladyfish seem to prefer small bait fish such as anchovies and menhaden, so casting lures that imitate silvery baitfish like small spoons, jigs, streamers or soft plastics with some flash or glitter are good choices.

Ladyfish are often seen breaking the surface pushing schools of bait along the beach or shore. Diving birds is a good indicator that fish feeding under them and often it is a pack of hungry ladyfish. They are aggressive feeders and you can catch them on many types of lures and natural baits. Shrimp, menhaden, mullet and even cut ladyfish themselves will draw strikes.

When fishing with artificials, sharp, erratic twitching actions will draw the most strikes. Ladyfish strike hard and fast. They smash a bait and then run. When they feel the pressure of the line, they jump and they usually keep jumping until they are brought to hand or they throw the hook, which happens most often.

If you do land a ladyfish, don’t try to lip it. They have small sharp teeth that will cut you quick. Grab them around the body behind the head. Whatever you choose, live shrimp, menhaden, spoons, jigs, flies or topwaters, Lady fish are great sport and a lot of fun to catch.

Also, they make great cut bait for everything from redfish, speckled trout, bluefish, Spanish mackerel, sharks, and even other ladyfish.

Cut ladyfish is often referred to as ” redfish candy”. Big redfish seem to love ladyfish. But many other species can be caught using ladyfish chunks. Often running in large schools, feeding Ladyfish attract other predators, including sharks and jack crevalle.

The Sharks and jacks hang out on the edges of the school looking to ambush any ladyfish that stray from the pack. Cast a chunk of fresh cut ladyfish to outside edge of the feeding schools and there’s a good change you’ll get a chance to tangle with a large shark or jack crevalle.

Smaller chunks will catch speckled trout, snook and Spanish mackerel. Offshore, bigger pieces dropped over bottom structure or around drilling platforms will catch snapper and grouper. So, they are fun to catch, they make great bait, and believe it or not, make a good fish taco if you clean and prepare them right.

How to Clean Ladyfish

Yes, ladyfish are not only edible, but actually quite good when prepared right. Now, they won’t replace snapper, grouper, trout or redfish, but they are worth a try when other fish won’t cooperate. You may have heard, or read, that lady fish are oily, bony and or bloody.

And there is some truth to it. Ladyfish do have a lot of very small bones that make it near impossible to filet like you would normally. The flesh however is not bloody and not fishy at all. But most anglers are not willing to, or know how to, deal with all the small bones. Much like jack crevalle, lady fish are regarded as good sport and bait, but not much else.

There is a trick that you can use to remove the meat from the fish and leave the bones. It is not your standard fish cleaning method and you won’t end up with a nice pretty filet like you may be used to. You will have what looks more like fish paste.

You remove the fillets from the ladyfish leaving the skin on. Then take a tablespoon and beginning at the tail end of the filet, scrap the flesh off the skin working towards the head end of the filet. As you scrape, those small pesky bones will remain attached to the skin leaving you with boneless fish.

From there you can use it in any number of recipes for fish cakes, fish balls, croquettes or fish tacos. Another option is to pressure can ladyfish bones and all and you end up with a product much like canned salmon where the bones are soft and edible.

How to Cook Ladyfish

Ladyfish are very bony and not considered to be good table fare, but mainly a fun fish to catch then release or use for bait. If you want to keep some to eat, bleed them out then place them directly on ice immediately. Lady fish is an oily fish with a soft mushy texture and a sweet taste.

There are a number of recipes for using ladyfish in fish cakes, croquettes, fish balls and fish tacos. Below are just a couple of examples of ways to prepare ladyfish. It lends itself well to a variety of seasonings and often used in fish soups and curries.

This is how to make ladyfish fish cakes:

For the recipe of ladyfish cake, you’ll need the following ingredients:

If you have ever used canned salmon, you know that it comes complete with the bones.

The Pressure canning process softens the bones so that they are completely edible.

You can use the following recipe to prepare lady fish in the same way and use it just as you would canned salmon.

Here is the step-by-step preparation, for canning and cooking ladyfish:

Try Something New Cook up Some Ladyfish

So, next time you’re fishing and get into some ladyfish, try some. I think you’ll be surprised at how good they are. From fish tacos, fish ball to croquettes, or even pressure canned, they might not be a trash fish after all. 😉 At the very least, they make excellent cut bait.

With no bag limit or size restrictions, easy to catch, tons of them and they are fun to catch. In the kitchen, they can take some of the pressure off of the more “desirable” fish and could be the difference between fresh fish tacos or going home empty-handed.

Are they gourmet fair? No. They’re not going to be anywhere near my first choice when it comes to table fare. But, they are even further from being “trash” fish. Give’em a try and let me know what you think in the comment section below. Don’t take my, or anybody else’s, word for it. Try it for yourself.